What Are The Best Pokemon Booster Boxes & ETBs to Buy in 2022?

In this article we’re going to look at the best Pokemon booster boxes to buy this year…with one key caveat – they are affordable!

It goes without saying, this is not investment advice! I’m merely sharing my opinion. You are responsible for how you spend your money!

Big disclaimer out of the way, let’s jump into it!

There’s only one place to start! Pokemon Celebrations is perhaps the most eagerly anticipated set of the modern era.

With 25 cards in the main set, and a nostalgic subset of promo cards from the last 25 years, there are some INCREDIBLE cards to collect.

From a reprinted Base Set Charizard to a Gold Mew to a Gold Star Umbreon – this is the set that just gives and gives. Literally every pack has stunning cards.

Plus there are a variety of different ETBs and collection boxes, so make sure you get your hands on some as these are so fun to open and packed with value!

Watch me Open 25 Celebrations Packs Below!

With the upcoming 25th Anniversary set called Celebrations, nobody would hold it against you if you saved your money!

But darn it, Pokemon have absolutely smashed it with Evolving Skies, and it’s a set you just can’t help but want to open. What’s even more incredible, there isn’t even a Charizard in it!

Instead this set is all about Eevee and its eight evolutions. With V and VMAX cards for each, alternative full arts, rainbow rares and gold cards this set is stacked to the rafters with big hitters. In fact, there are a whopping 34 secret rares! Good luck trying to complete a master binder 😉

But ultimately, I feel this is one of the best new sets for artwork and a great way to whet your appetite ahead of what’s the come!

Best Pokemon Set for the Fun of Opening Packs

*I’m providing PSA 9 values instead of PSA 10s to give a more realistic price guide. There is of course every possibility that some of these cards could grade a 10.

Why I Think It’s Worth Buying

If you’ve heard Poke-tubers rave about Hidden Fates as ‘one of the best sets from the Sun & Moon era’, they’re not wrong!

This is such a fun set to open and collect, because there’s such diversity across the card designs.

You’ve got 68 standard cards, followed by a stunning triple-team Moltres, Zapdos & Articuno rainbow rare. Then there’s a subset of 94 cards from the ‘shiny vault’, with the ultimate chase card being the Full Art Charizard GX.

Similar to the Generations set (below), it’s not possible to buy Hidden Fates booster boxes. To acquire these wonderful cards you’ll need to look for Elite Trainer Boxes, Tins, and Collector Boxes. There are so many valuable hits that you can potentially pull from Hidden Fates booster packs, it’s definitely worth picking some up. 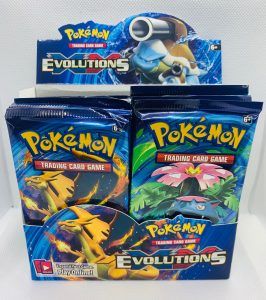 You knew it was coming! XY Evolutions is the hottest modern Pokemon booster box in recent memory. It just goes to show how nostalgic the original artwork is for people, and what it means to open packs containing these card designs again.

What’s interesting about the set is that it’s actually pretty poorly printed. You’ll often find cards that are well off-centre. But what may seem like a flaw, has actually played to its advantage. This is because when you’re lucky enough to grade a card in a PSA 10, it’s worth a considerable amount of money. Why? Because there just aren’t that many of them, compared to the flood of PSA 9’s!

Take for example, our king and chief the holographic Charizard. Look at the PSA report below. There are approximately 20 times as many PSA 9’s as there are 10’s! It’s no wonder that despite only being a few years old, top graded versions are going for thousands of pounds.

This is why Evolutions is a booster box worth buying. Sure, it’s a bit like a spin at the roulette table, but you could theoretically pull one card that is worth 5 times the value of the entire box! It’s crazy! Plus you get to experience the buzz of seeing all your old friends again. O.G. Bulba, Squirtle, Pika, they’re all there! Or, if you’re a fan of sealed product, you could lock it away for a decade and sit on it as an investment piece.

Whatever you decide to do with it, snap up an XY Evolutions Booster Box while you still can.

Watch me Open an Evolutions Booster Box Below! 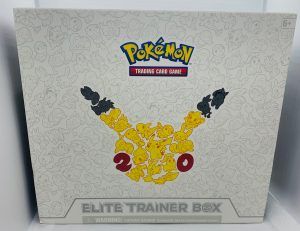 Back to the XY series, and to the Generations set that was released to celebrate the 20th anniversary of Pokemon.

Unlike most sets, it wasn’t possible to buy booster boxes for Generations. Instead, booster packs were included as part of an ‘Elite Trainer Box (ETB)’ or ‘Collector Boxes’ which featured a particular Pokemon.

In my opinion, the combination of popular Gen 1 Pokemon, beautifully designed full art cards (like this Pikachu) and more limited acquisition of booster packs (ETB contain 10 and Collector Boxes contain 4), make Generations a sleeping giant in terms of value. 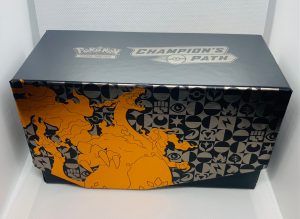 Although one of the most modern Pokemon sets on our list, Champion’s Path rightly takes its place.

Let’s cut to the chase, this is a fiercely sought-after set. Pre-orders went mad, and it was very hard to get hold of an Elite Trainer Box. In fact, most online retailer limited purchasing to one-per-customer, as people were snapping them up so quickly to resell on eBay for an inflated price.

So, why the hype and hysteria?! You guessed it, it’s our man Charizard!

Firstly, we’ve got the Charizard VMAX secret rainbow rare, and then we have an iconic black and red Charizard V card which is also a secret rare. Two bloody secret rare Charizards! No wonder collectors could barely contain themselves!

Most online retailers remain sold out, so if you’re looking to acquire a Champion’s Path Elite Trainer Box, or Collectors Box, your best bet is eBay.

Next up we have an iconic set from the Sun & Moon era; Burning Shadows.

The previously released Sun & Moon Base Set and Rising Guardians made waves with the introduction of ‘secret rainbow rare cards’, a design never seen before on a Pokemon card. However Burning Shadows was the set everyone was waiting for when news dropped of a secret rare rainbow Charizard!

With PSA 9 copies of the card now reaching £1,000+ and PSA 10 at the £4,000+ mark (at the time of writing), it’s certainly worth considering adding a booster box to your collection.

And it’s not just the Charizard that has significant value. The stunning gold energy cards (fire, darkness and fairy) go for hundreds of pounds in a PSA 10. In fact, with 22 ‘secret rares’ there’s significant value to be had in most Burning Shadows booster boxes.

Estimated Value of My Vivid Voltage Half Booster Box

*I’m convinced the ‘Amazing Rare Rayquaza’ is worthy of a PSA 10. Good centering, no scratches on the holofoil and no edgewear. Obviously if it comes back a PSA 9, the estimated profit would be lower. Just trying to be as transparent as possible here!

Released in November 2020, after a crazy summer in the Pokemon card community, Vivid Voltage very much kept the party going. Usually we can credit a set’s success to everyone’s favourite fire dragon, but it was actually the world’s most loved electric mouse that sparked the chase!

With 4 fantastic Pikachu’s to go after, including the much sought after Gigantamax Pikachu VMAX Secret Rainbow Rare, this is a feel good set with great balance.

Having been through several booster boxes, the pulls are diverse and keep you on your toes. From full art cards (like this beautiful Alakazam V) to amazing rares (like this vibrant Celebi), you feel like you’re getting a great deal of value out of the packs. And although the card doesn’t set the world alight, there’s even a Charizard in the set too. The reverse holo or the special ‘cracked ice’ promo are my favourites.

Like any set released in 2020 (when the whole world caught on to grading cards), I recommend exercising caution. If your plan is to open and grade, everyone else’s is too! Expect the PSA population reports to climb high over the next few years. But if you want a set with great cards to build your collection, with much loved Pokemon, Vivid Voltage is a great shout.

The modern set everyone had been waiting for. Shining Fates hit the shelves in early 2021 with great anticipation. Seen as the follow on from the hugely successful ‘Hidden Fates’ set, the diversity of artwork, popular Pokemon and chase cards make it a fun set to open. Combine that with an incredible looking Charizard VMAX full art card, and there’s plenty of value to gain if lady luck is on your side. Retail demand remains through the roof though, and this set sold out quickly. Whether you’re buying to crack open packs or keep sealed for a rainy day, your best bet is probably Bay.

If you’re a fan of Japanese cards, you will love the new Eevee Heroes set. With a focus on Eevee-lutions, in both full art V and VMAX cards, there are some incredible looking artworks to pull from this set. I particularly like what they’ve done with these VMAX boxes; you get 8 booster packs (each containing 5 cards) and a special VMAX booster than contains one VMAX card and 3 holographic energy cards. It’s something a bit different to what we’ve seen from recent Elite Trainer Boxes, and in my opinion, really fun to open!

Thank you so much for making it to the end of my article. I hope it’s given you a few ideas for your collection.

I just quickly wanted to reiterate that these suggestions are merely my opinion, and what I like spending my money on!

Card collecting is a hobby to be taken in any direction that you want. No one is right or wrong when the topic is subjective; simply collect the cards you enjoy and that bring you happiness. 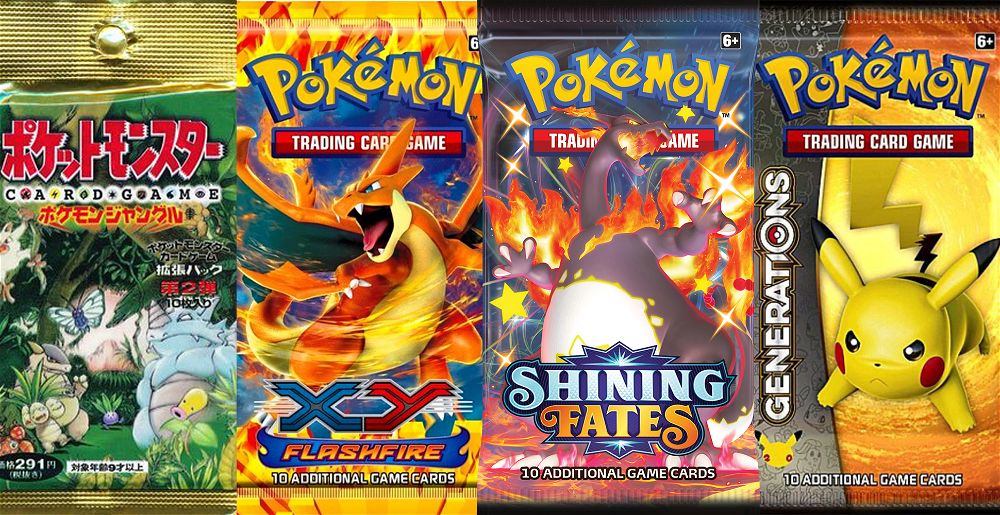