These are some of the rarest, most expensive Charizard Pokémon cards ever bought…

In this article we’re going to look at some incredible Charizard Pokémon card purchases from this past year.

These cards went for eye-watering figures, to new owners with seriously deep pockets.

We’ll discuss why the cards are so valuable, digging into their PSA population reports and other interesting factors that contribute to their rarity. 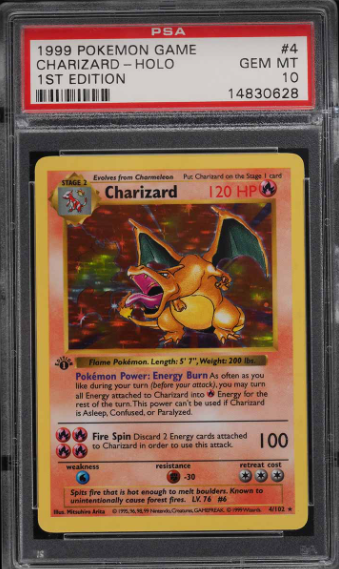 What Makes The 1st Edition Base Set Charizard So Valuable?

Let’s start with the holy grail of Pokemon cards, the 1st Edition Base Set Charizard. This is where it all began folks. With recent sales of PSA 10 variants topping $350k, what we’d all give for a time machine now huh?! Even just five years ago, these were selling for around $10k. At the time, that seemed crazy money, but it looks like chump change now right?!

Anyway, missed opportunities aside, the iconic design has the power to teleport any big kid back to their childhood in a flash. It’s the ultimate nostalgic Charizard Pokémon card and any lucky owner should be proud to have it in their collection. 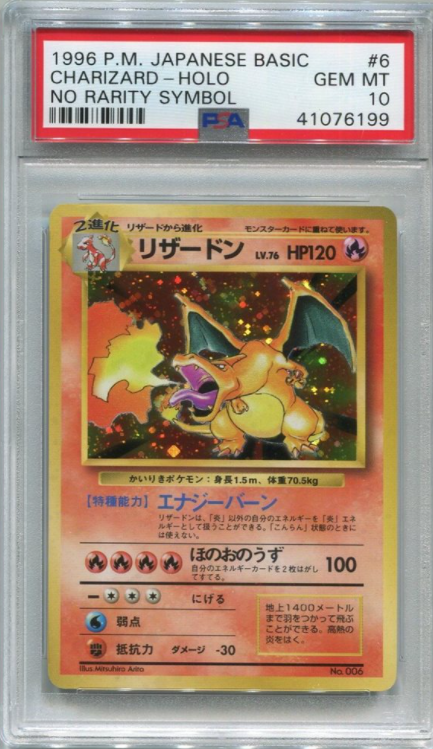 What Makes The Japanese No Rarity Symbol Charizard So Valuable?

Collectors go mad for misprint or error cards. And for our next Charizard card, we have to take our time machine all the way back to 1996. ‘No Rarity Symbol’ cards from the Japanese Base Set are widely considered the equivalent of the English 1st Edition. These cards are from the very first print run, and as the same suggests, they didn’t have a rarity symbol in the bottom right corner.

Although there’s little documentation of when rarity symbols were introduced to the Japanese Base Set, it wasn’t particularly long after ‘no rarity cards’ were released. As such, they’re incredibly rare and valuable. Combine that scarcity with our main man Charizard, and only 6 PSA 10’s in existence, it’s no wonder this is one of the most expensive Charizard’s one could ever wish to acquire. 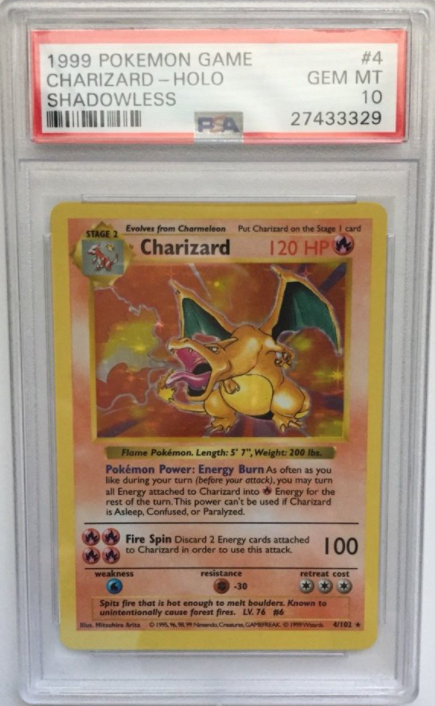 What Makes The Shadowless Charizard So Valuable?

As you may know, after 1st Edition, and before the Unlimited Base Set print run came Shadowless Pokemon cards. Although not quite as valuable as 1st Edition, because Shadowless cards were only printed for a short time, they are highly sought after too.

Interestingly, at the time of writing, only 54 copies of the Shadowless Charizard exist in a PSA 10, compared to 120 in 1st Edition. As you would expect, this makes them incredibly valuable and a wonderful investment piece for any collector. 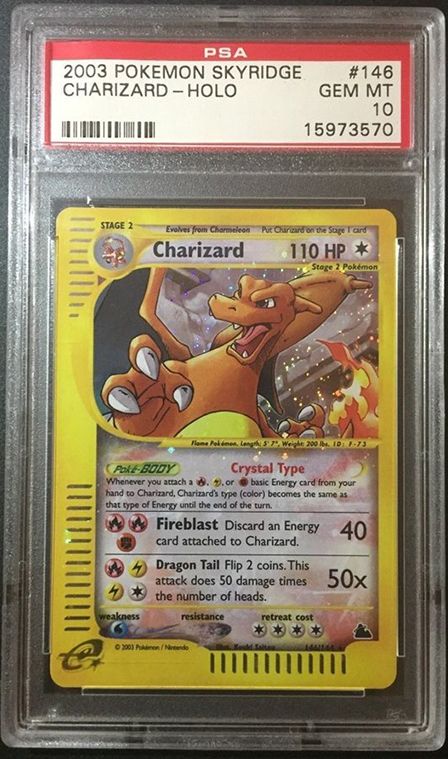 What Makes The Skyridge Holographic Crystal Charizard So Valuable?

Next up we have an extremely unique and much sought-after card. The ‘Crystal Charizard’ from Skyridge, is different to its predecessors because of its colour, design and artwork. Featured a cartoon-esq drawing that almost pops off the card, we’re also treated to a pale background and eye-catching crystal holographic area.

Released in 2003, Skyridge was a good four years beyond the initial Pokemon boom, and one of the last few WOTC area sets to come out. As such, sealed product is incredibly hard to find, and mighty expensive if you do. Needless to say, this ultimate chase card now costs a lot of money, with recent eBay listings advertised north of £20k. 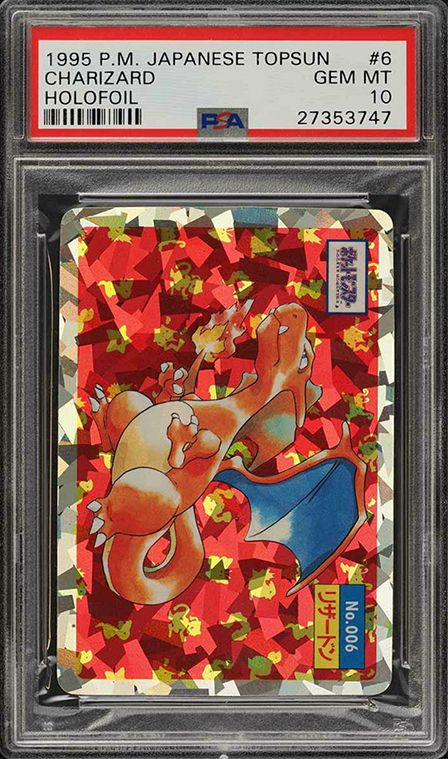 What Makes The Japanese Topsun Holographic Prism Charizard So Valuable?

Now for something so rare, it’s hard to even price!

Interestingly, Japanese Topsun Pokemon cards (which came out in 1997… 1995 is when they were trademarked) came in packs with chewing gum. There were two sticks of gum, and two cards per pack. Out of the 150 cards, 16 were ‘Prism’ cards, which is the holofoil design you see above.

Unlike early WOTC boosters where the chance of pulling a holo version were 1 in 3, the chances of getting a prism card in Topsun packs were only 1 in 40!!! Now we begin to understand just how rare the Charizard is, especially in a PSA 10! In fact, only 18 of them exist, and I doubt that number will ever change. At the time of writing, there’s a PSA 9 on eBay for over £13k. 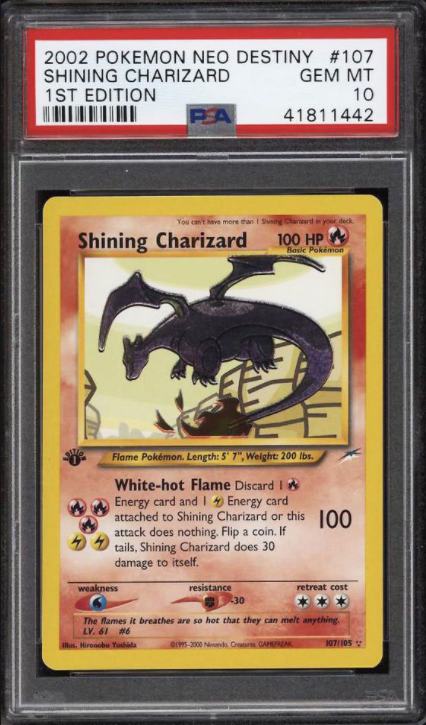 This Charizard Pokémon card is special for several reasons. Firstly, this is the first time WOTC introduced the ‘shining’ design to their holographic cards, making the design totally unique. Next, the Neo sets were the last time they printed first edition cards. It’s a little stamp, but it makes he huge difference in terms of value. And lastly, there’s only 201 PSA 10’s in existence. All of these factors combined make the 1st Edition Neo Destiny Shining Charizard a hugely sought-after piece for high-end collectors. 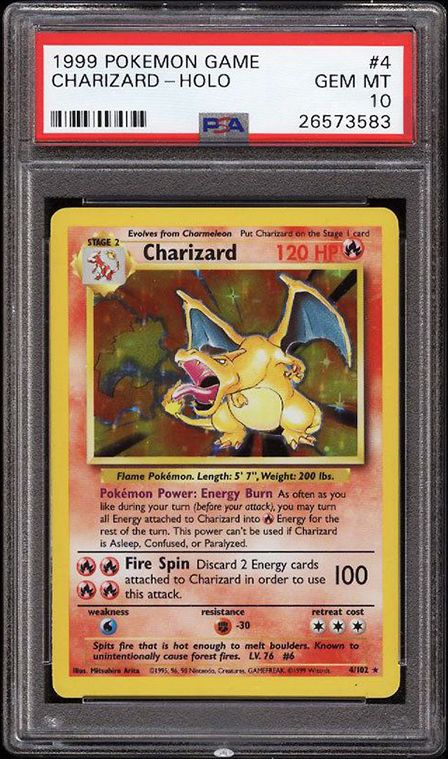 What Makes The Unlimited Base Set Charizard So Valuable?

It’s hard to create a list of the most valuable Charizard cards, and not include every variant of Base Set! So of course, we must include the Unlimited Base Set Charizard.

Widely considered as the most graded card in Pokemon history, it’s not the PSA population that drive its value, it’s the sheer nostalgia. This is the card that every kid wanted, and many were lucky to have in ’99.

Being able to own one again is something many collectors truly value, and as such, continues to drive prices higher and higher. Even PSA 9s (where there are now over 5k graded) fetch several thousand pounds on eBay. It’s the price we pay to relive our childhood I guess 🙂 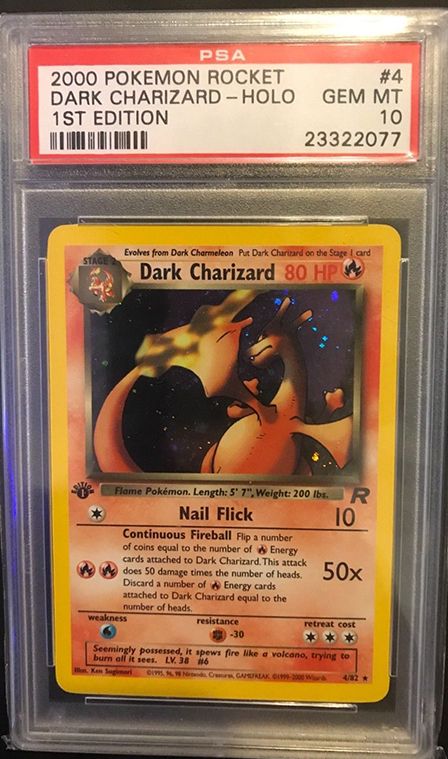 What Makes The 1st Edition Holographic Dark Charizard So Valuable?

Shortly after the release of Base Set, we had Jungle, then Fossil. Base Set 2 was was met with disappoint among fans hoping for something new. Thankfully, the 2000 Team Rocket set hit a home run, with edgier artwork and the introduction of ‘Dark Pokemon’.

The 1st Edition Dark Charizard is an iconic card. It’s the first time we’d seen something a bit different from Mitsuhiro Arita’s OG design. This time Ken Sugimori opted for devilish looking Charizard that almost looks like he’s considering whether to attack, or fly off into the night sky. The more you look at it, the more you’re immersed into the scene. It really is clever artwork and widely appreciated among fans.

Because of its popularity, there’s a decent number of PSA 10s out there, but still, there are 3x as many PSA 9s.

For many, myself included, Team Rocket is one of the best vintage Pokemon sets, and as such, Dark Charizard will always be a highly valuable and desired card. 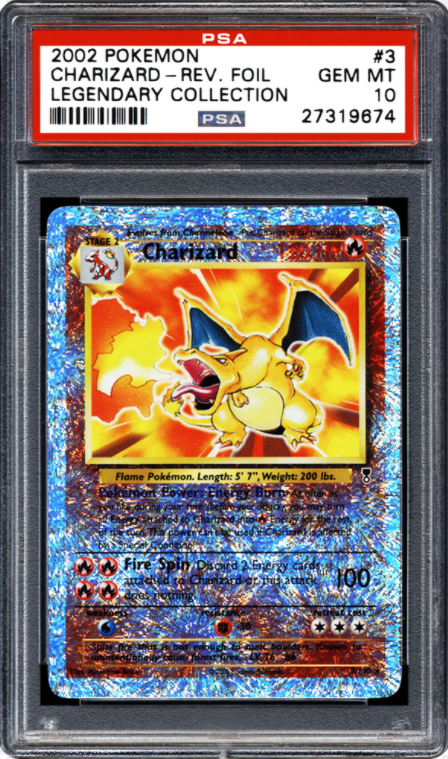 What Makes The Legendary Collection Reverse Holo Charizard So Valuable?

Next up we have a card that divides options; the reverse holographic Charizard from 2002’s Legendary Collection. Some people love the ‘fireworks’ reverse holo background, others think it’s all too in-your-face. Personally, I love it. It’s one of my favourite cards!

Interestingly though, what makes it so valuable, aside from the iconic Charizard artwork, is how difficult it is to grade in a PSA 10. As you can see below, only 75 exist. This is because there’s an extra level of complexity when grading this card, as the large holographic area was often susceptible to print lines. Combine that with possible edgewear, corner nicks and scratches, it’s no surprise there’s some a low population of PSA 10’s. 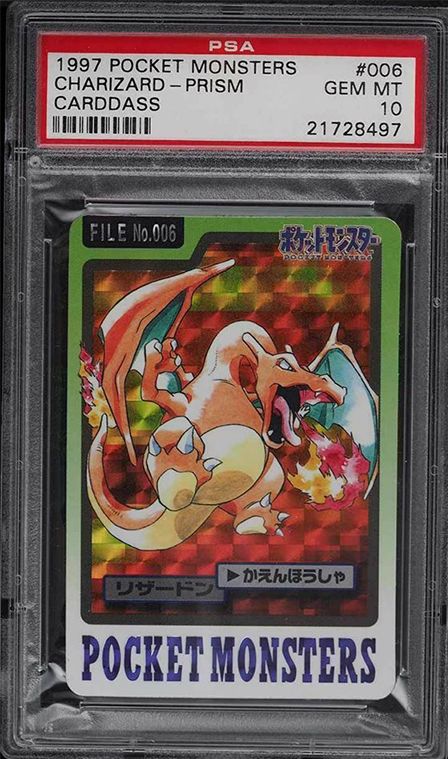 What Makes The Pocket Monsters Carddass Prism Charizard So Valuable?

Propping up our list is a very interesting Charizard card.

Produced by Bandai in ’96 and ’97, these ‘Pocket Monster’ cards were distributed through vending machines in Japan. Costing 100 Yen for 5 cards, or 20 for individual cards, we get a fascinating insight into what life might have been like for Japanese kids during Pokemon’s early years.

Slightly similar to the Topsun card above, the rarest cards had a prism holofoil background. However, as we can see, the design is much more symmetrical.

With only 58 PSA 10s in existence, the value of the Carddass Prism Charizard isn’t driven so much by nostalgia, instead it’s more about owning a piece of Pokemon history from the place it all began.

Why is Charizard so Expensive?

Charizard has a special place in the hearts of collectors. Whether you were trying to complete the video games, show off your card collection to your friends, or routing for Ash to become the world’s greatest Pokemon master on TV, you knew that with a Charizard it was possible. To this day, this fire-breathing dragon is a symbol of strength, power and prestige and people will happily pay to acquire him. This is why Charizard Pokémon cards are so expensive and sought-after.

Are Charizard’s worth collecting?

When it comes to Pokemon cards, my motto is ‘collect what you love’. If you’re not a big fan of the character (or the price tags), then I’d recommend against going down this path. If however, you like the character, enjoy the artworks and potentially want something as an investment piece too, then collecting Charizard cards is worth it. Just remember though, card rarity and condition is very important in terms of value. Get clued up before investing heavily.

How can you tell if a Charizard card is rare?

Great question! This is exactly the kind of assessment you should be making before investing in a Charizard card. Generally speaking, older Charizard cards (1995-2003) are rare and valuable as they are many years out of print. However, card condition plays a massive role. Grading companies help with this by assessing the state of the card out of 10. The better the condition, the rarer the card. They also have ‘population reports’ which tell you how many cards have achieved a particular grade (example here). Again, this is really useful for understanding how rare a Charizard card is. For more information about grading see here.

Wrapping Up – Where Do We Go From Here?!

So there you have it!

The rarest, most expensive Charizard Pokémon card purchases from this past year.

As market prices begin to correct themselves, we’ve seen concerning drops in some of the cards above.

I’ll be the first to admit I probably overpaid for a few cards in 2020!

But if you take a long-term view on Pokemon card investing like I do, it’s not the end of the world.

Am I confident prices will one day reach these heights again? Sure am!

If your strategy was a quick pick-and-flip, then it probably needs a rethink.

Ultimately though, there’s nothing wrong with picking up the cards you love, and growing your collection.

Here are some cool Charizard Pokemon cards I added to my collection in 2020 (some purchases, some self-graded). 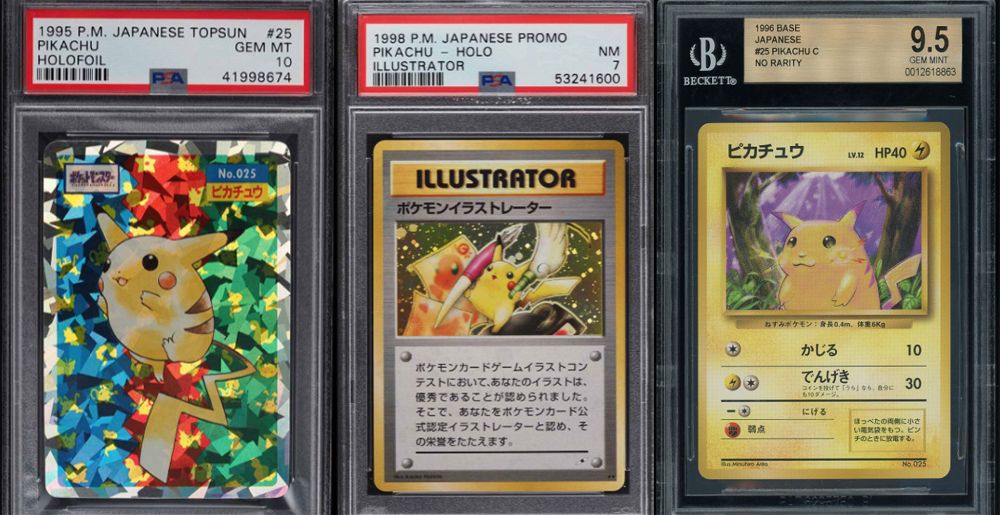 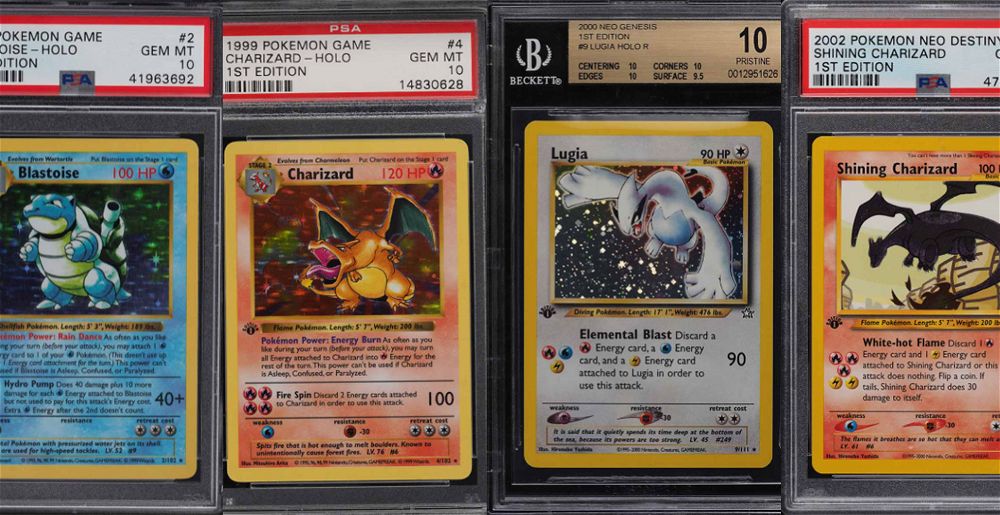