How Much is Ancient Mew Worth?

Ancient Mew is one of the most iconic promotional Pokémon cards in history.

Given out at cinemas for Pokémon the Movie 2000 it will forever be associated with the hey-day of Pokémon.

Over twenty years later, you can still find plenty of sealed copies available on eBay, which does beg the question…

How much is Ancient Mew really worth?

Well, before we can answer this, let’s make a quick distinction on the varieties out there (oh yes, there’s more than one!), and then take a deep dive into the graded population reports.

How Many Ancient Mew Varieties Are There?

Across the UK, US and other participating countries Ancient Mew cards were given away during the week of the films release. There is one version of this particular Ancient Mew variety.

Incredibly, there are 5 different Japanese print runs of Ancient Mew!

The first one is famous because the word Nintendo was misspelled as “Nintedo” in the copyright text at the bottom of the card. Not so much quality control in those days!

Interestingly, they corrected the spelling for the second print run, but because it only ran for a short window, the corrected version is actually much rarer and more valuable.

We then had a third print run where the holofoil design was changed to a ‘cosmos’ effect, from the speckle effect seen in the previous two.

Then to mark the 20th anniversary of the card in 2019, a fourth print was included in special Mewtwo Strikes Back pamphlets.

And finally, South Korea got the fifth print when the film was released there in 2020.

How Many PSA Graded Ancient Mew Cards are There?

Please note, the populations below were taken at the time of writing. They will of course change on a daily basis! See the links for the latest reports!

If we look at the PSA population for the UK/US printed version, there are A LOT of graded cards!

However, when we dig down into the Japanese versions of Ancient Mew, it tells a very different story…

*Interesting that the Cosmos version of the card seems much easier to graded a PSA 10, compared to the two previous print runs.

Latest report for the three variants above here.

How Much is Ancient Mew Really Worth?

Now we’ve done the research, the picture is a lot clearer.

Despite having such a large PSA population report, the demand for “our” version of Ancient Mew is pretty decent!

I personally feel there’s a lot of nostalgic value built in to these prices, but here’s some examples of recently sold Ancient Mews: 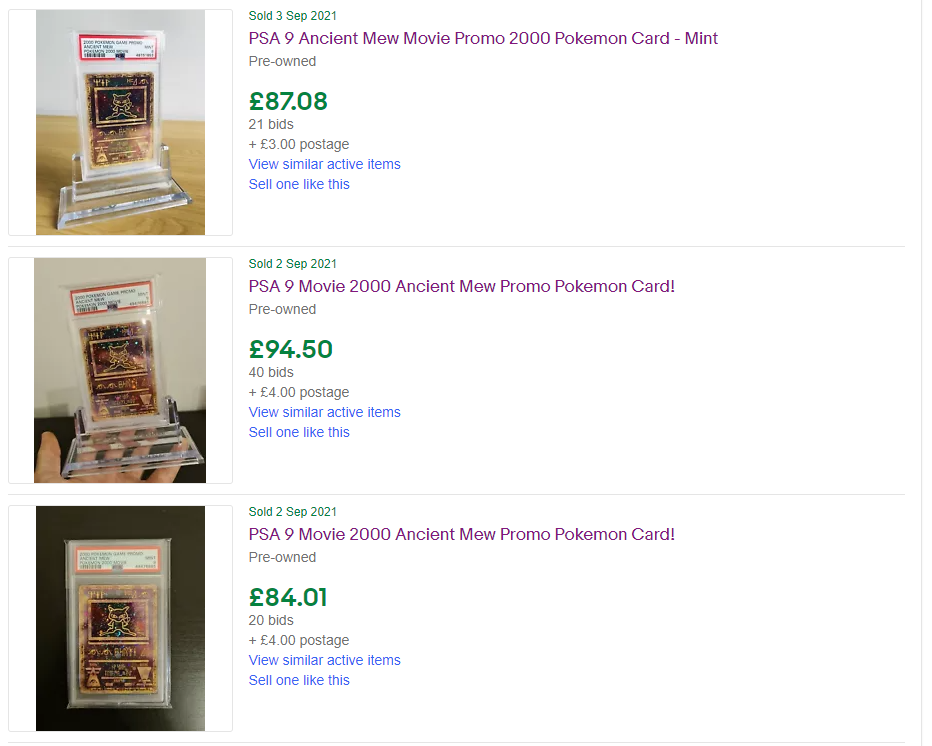 So what above the Japanese versions… 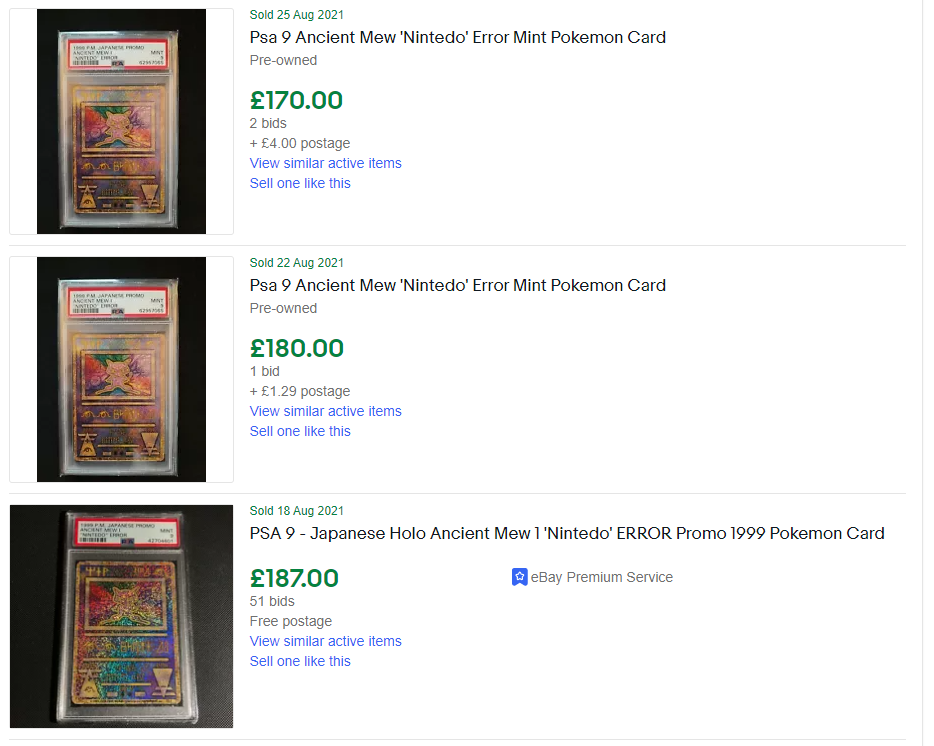 I struggled to find a sol listing for a PSA 10, but to give you some context, I did find one listed for just over £1,000… 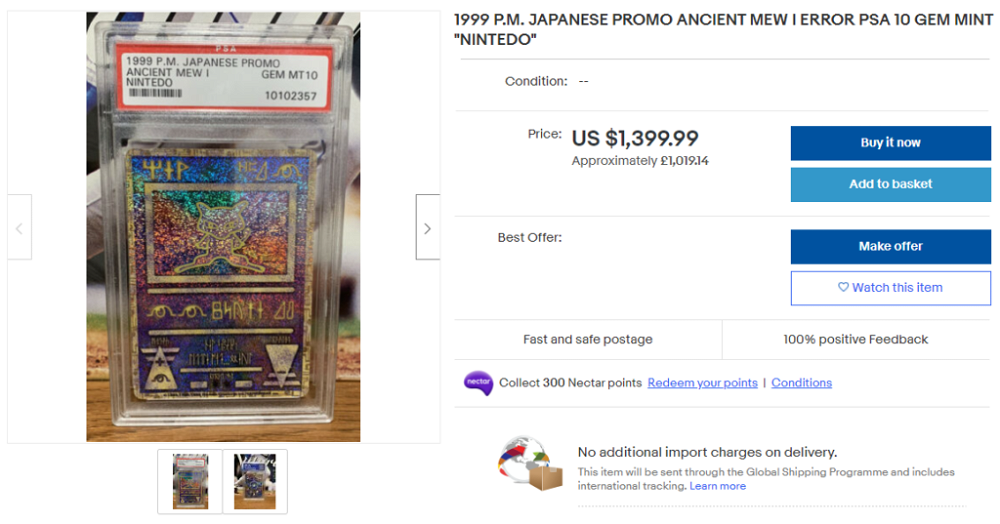 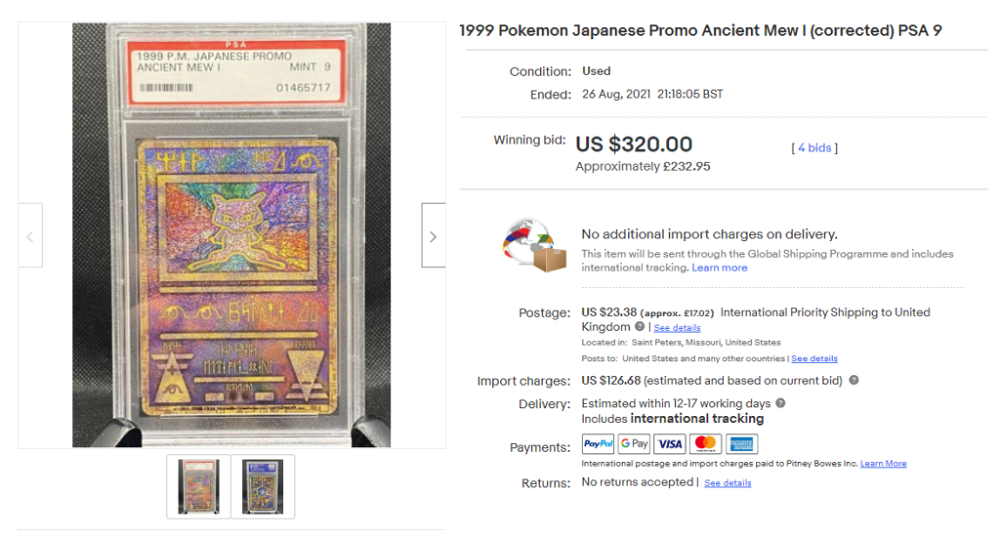 With nearly twice the number of graded cards, compared to the two previous print runs, its no surprise that PSA 9s sell for much less.

At approximately £90-£100 they’re in the same ballpark as the UK/US version.

Surprisingly I wasn’t able to find a recently sold PSA 10, but because there’s such an even distribution of 9s and 10s in the PSA population report, I’d probably only value these at about £400-500. 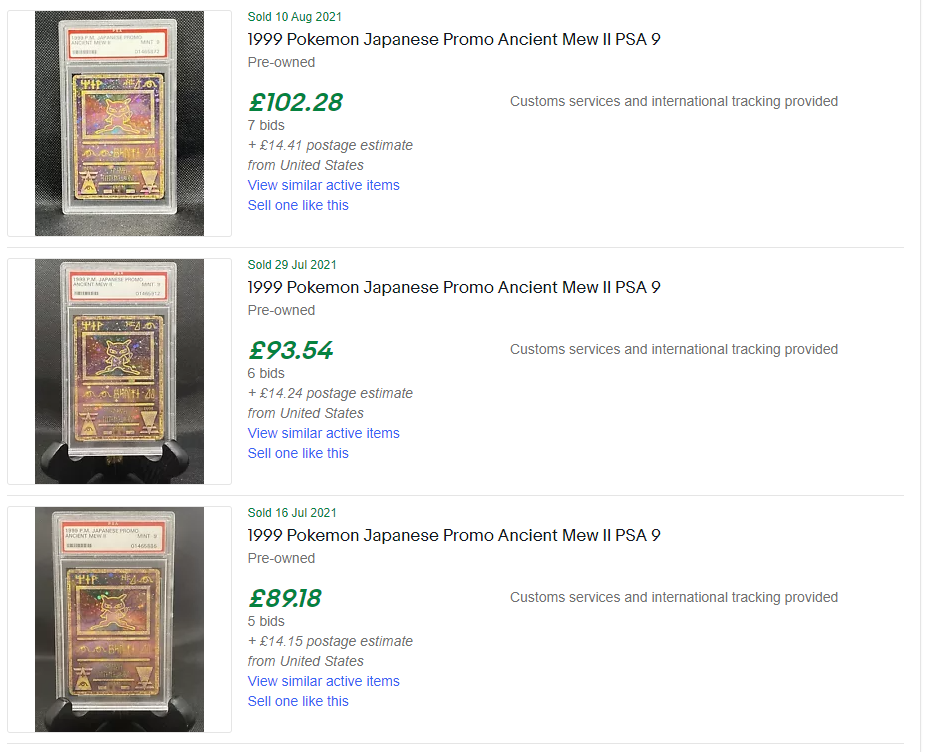 Of course with this being a relatively modern card, and the ongoing backlog at PSA, it’s harder to accurately judge the value for this card.

Quite simply, if an influx of these cards get graded as PSA work their way through, the value goes down as supply goes up.

But let’s take a look at some recent sold prices anyway!

Usually you’d expect the PSA 10 value to be much higher than the 9, but because so many of these cards grade a 10 (revisit the population report above) it’s undermined the value of it.

In this scenario I would never recommend buying the PSA 9 over the 10!…Unless you just want the card for your collection and don’t care too much about values! 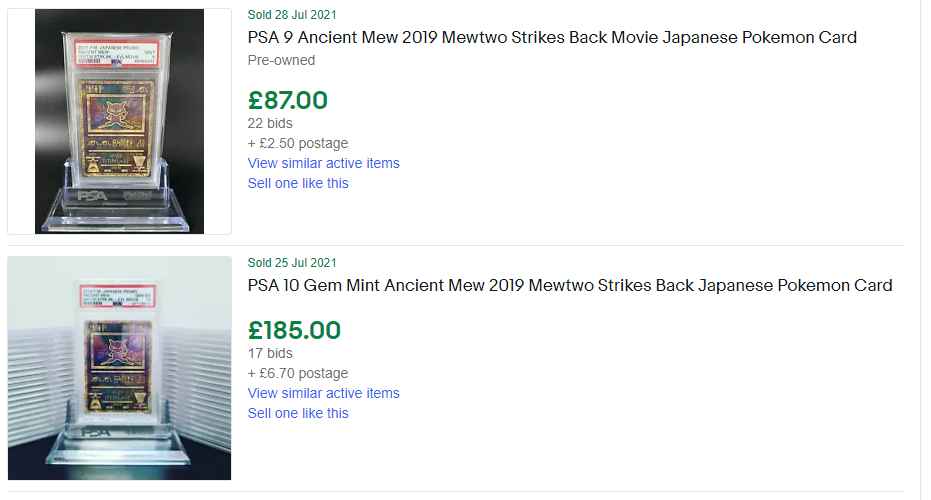 And finally, the Korean version!

With so few of these graded, it was cool to find the sold prices for both a PSA 9 and 10 next to each other!

In my opinion, I quite like this purchase (the PSA 10).

People love the Ancient Mew card, and when you cotton on to the different variants, it’s quite fun trying to collect them all.

I think at £90 and such a low PSA population, that’s quite a shrewd buy, and one I’m probably look to do too! 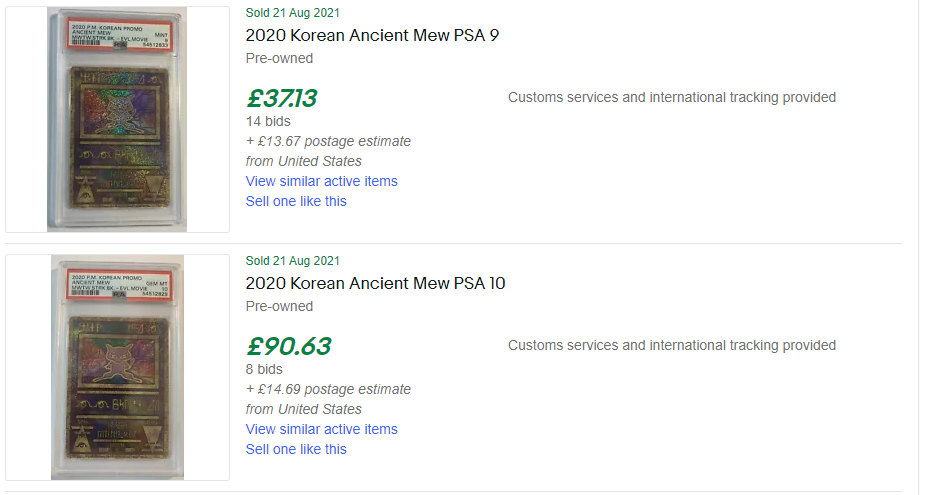 So Which Ancient Mew Card Should You Buy?!

And just for a bit of fun to finish off…

What Does The Ancient Mew Card Actually Say?!

As always, thanks for reading and I hope you found this article interesting and valuable!