What Is A Shadowless Pokemon Card?

If you’re new, or getting back into the world of Pokemon cards, you’ve probably heard the word ‘shadowless’ banded around.

Shadowless Pokemon cards are the earliest version of the 1999 English Base Set.

Because of their scarcity and rarity, they are considerably more valuable than the Unlimited Base Set that was produced shortly after.

How to Tell if A Pokemon Card is Shadowless?

Shadowless Pokemon cards can be identified through several key features:

2. Another way to tell if a Pokemon card is shadowless is to look at the HP (hit points) on the top right corner of the card. Shadowless Pokemon cards have a thinner red print compared to the unlimited versions. 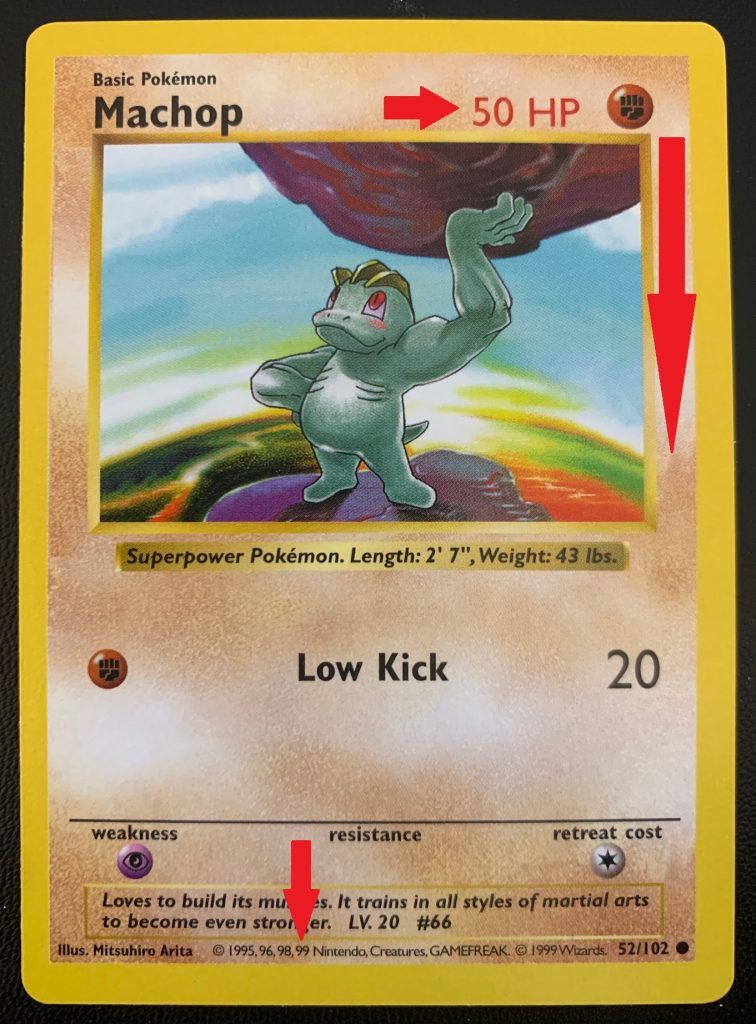 How Much Are Shadowless Cards Worth?

In order to fully understand the value of your cards, it’s important to distinguish the different types of shadowless Pokemon cards.

1. Starting off, we have 1st Edition Shadowless Pokemon cards. These are by far the most valuable cards.

2. Next, we have Shadowless Pokemon Cards. These don’t have the first edition stamp, but they are still very valuable.

3. Lastly, we have the Unlimited print run. These cards are not shadowless.

Of course, the value of a card it depends on its condition, rarity, Pokemon popularity and grading score. Generally speaking though, shadowless Pokemon cards are some of the most sought after and valuable you can own due to their age, limited print run and nostalgic value. 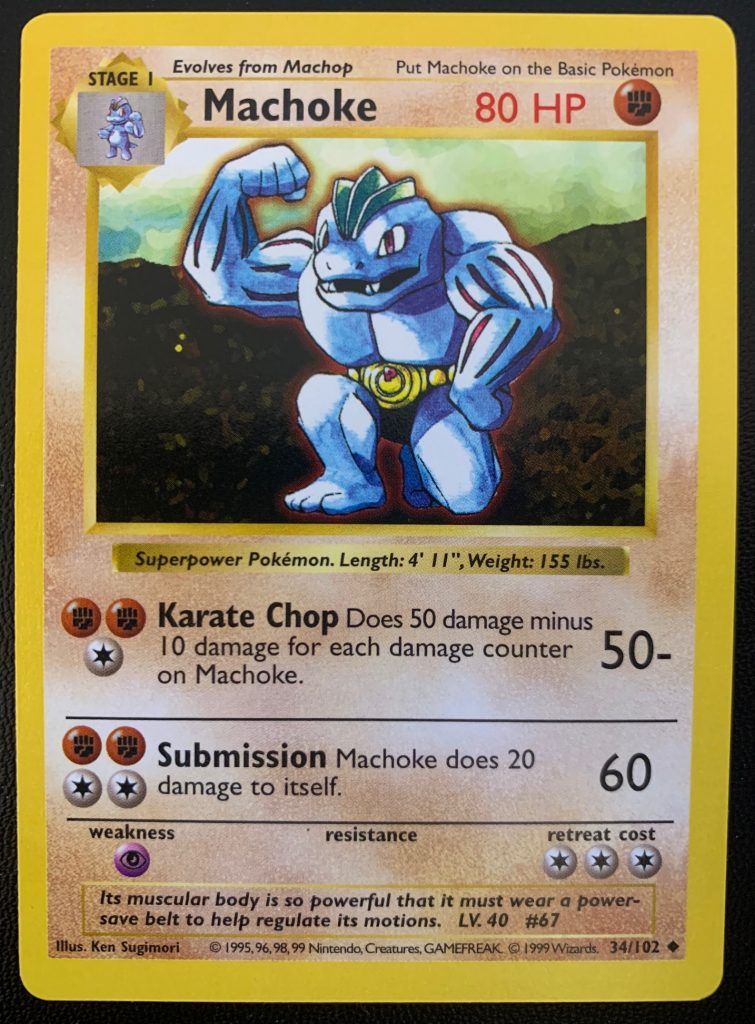 Are All Shadowless Cards 1st Edition?

Not all Shadowless Pokemon Cards are 1st Edition. A card needs the 1st Edition stamp to be classified as so.

Are All 1st Edition Cards Shadowless?

If we swap the question round, then yes, all 1st Edition cards are shadowless! If you own, or can get your hands on these, you hold some of the most valuable cards in the game.

Quick caveat – the only exception to the rule is the 1st Edition Base Set Machamp. This card was always printed with the 1st Edition stamp, whether it was shadowless or not. The shadowless version (as seen below is far more valuable, even if it’s a PSA6 like mine!) 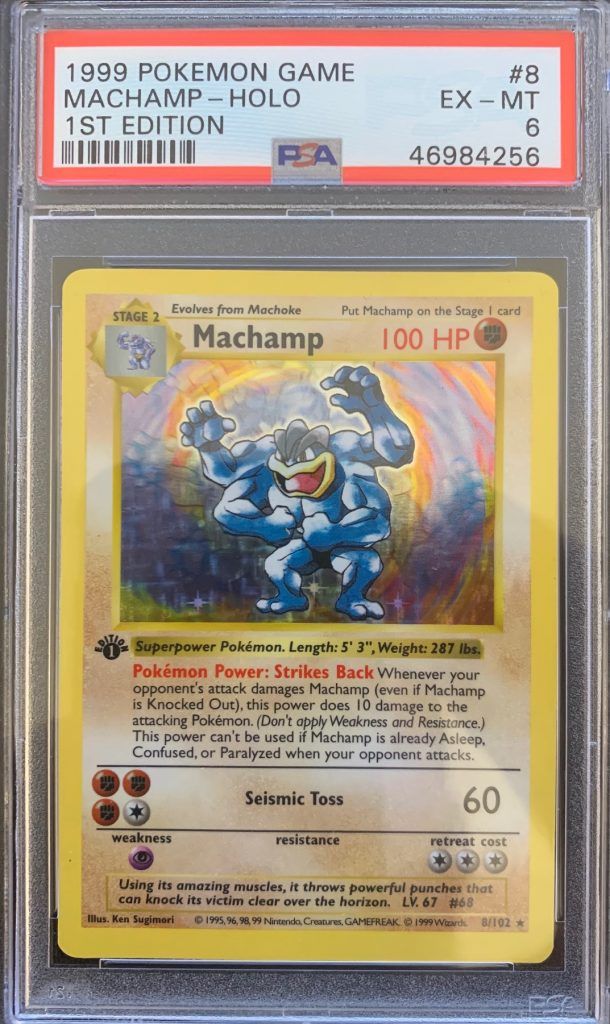 Aside from buying shadowless Pokemone card singles off eBay, if you like the idea of pulling them from sealed products (and your wallet can take it), here’s where to find them…

How to tell if a Base Set Booster Box is Shadowless?

There is only one way to guarantee if a booster box is shadowless, and that’s carefully checking the booster packs inside without jeopardizing the seal.

Around the semi-circle there are three cardboard tags which may or may not already be broken. By gently pressing down on the semi-circle it’s possible to just about see the packs inside.

As we discuss below, one of the key distinguishers of shadowless booster packs is that ‘Trading Card Game’ logo is at the bottom (compared to the top for unlimited packs). By sneaking a peek inside the box, you’ll be able to identify whether the packs inside are shadowless or not.

*Major caveat! Some collectors may see this as damage to the box, so proceed with caution.

Other indicators (but not guarantees) include:

1. Shadowless booster boxes have a Charizard on the side that has green wings, compared to the unlimited version which has blue wings. Bear in mind there are green wing boxes that contain unlimited packs.

2. If the shrink wrapping doesn’t have Wizards of the Coast logos on it, then the chances of it being shadowless are greater.

3. If there is only one country code listed on the bottom of the box, then the chances of it being shadowless are even greater.

How to tell if a Base Set Booster Pack is Shadowless?

There are two types of Shadowless booster packs. Once with a long seal at the top, one with a short seal. Here are some key elements to help you distinguish whether a pack is shadowless:

1. On shadowless packs, the ‘trading card game’ logo is at the bottom, whereas on unlimited packs they changed its position to the top.

2. On shadowless packs it says ’11 Tradeable Game Cards’, whereas on unlimited packs they changed it to say ’11 Additional Game Cards’.

There are five Base Set theme decks. These are called:

Each deck has shadowless variants.

How to tell if a Theme Deck is Shadowless?

1. The only known way to guarantee whether a theme deck is shadowless is that it has a gold strip around the top seal.

Other indicators (but not guarantees) include:

Without the gold seal, it’s more of a gamble when it comes to theme decks, so proceed with caution.

There is a great guide here, which specifically explains what to look out for for each deck, and the chances of it being Shadowless. It’s well worth a read.

Below is an example of a Shadowless 2-Player Starter Deck, which contained the Machop, Machoke and Machamp you see above. 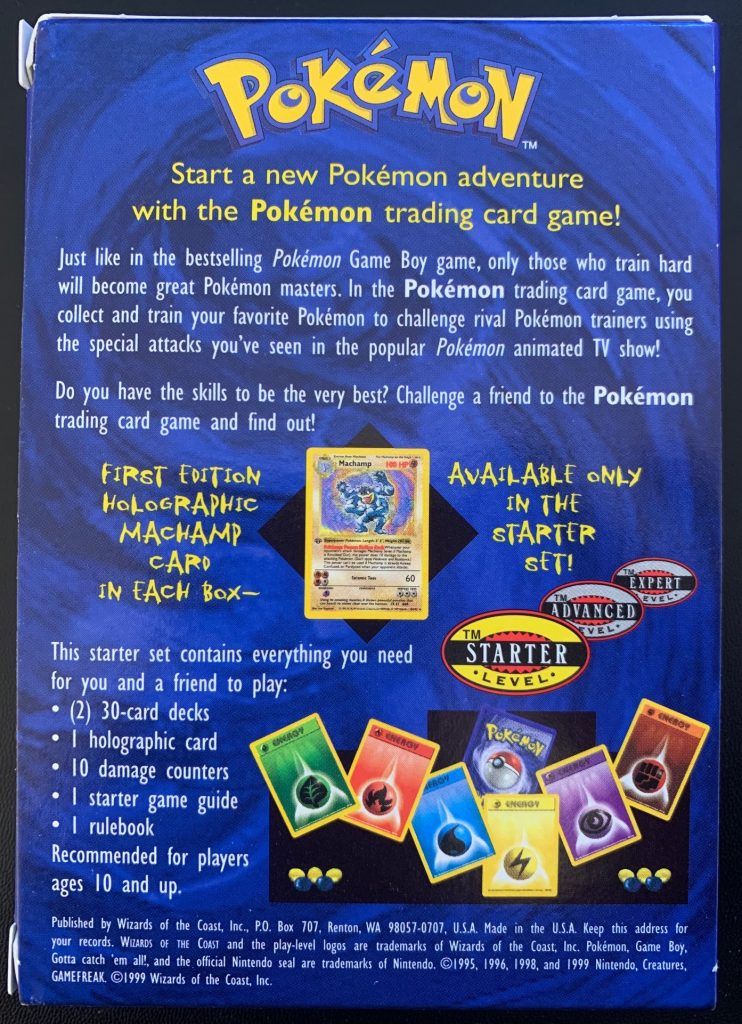 Conclusion: The Hunt For Shadowless Cards

Shadowless cards are a great addition to any collection, and because of the intricacies of finding them, the hunt is incredibly rewarding.

Hopefully now you’re well educated in the shadowless field and can pick up some great finds on eBay.

Oh and one last tip, I always recommend getting your shadowless cards graded. No matter their condition, there’s value to be added.

Good luck Pokemon master; you’re ready to enter the world with no shadows!